There is a cairn above Fearnan, clearly marked on the Ordnance Survey Map (OS Explorer map: OL48 Ben Lawers & Glen Lyon). It is high above the village on Creag a’Mhadaidh behind Easter Auchtar. (Mhadaidh means a fox or wolf.) Recent tree felling has helped to make it a little more obvious to the naked eye than before, but the interesting thing about it is that, unlike most cairns, it is not on the very summit of the hill.

Fiona Black, of Grandad’s Cottage, provided the story behind the origins of the cairn and its position above the village. The family refer to it as ‘Dad’s Cairn’.

Fiona started visiting the village in the 1950s when her father, Donald MacLeod, bought one of the cottages in Dalchiaran and the family would come during the long school holidays.

Dalchiaran Cottages (from behind) in the 1950s

At that time, the house was simply Cottage No 2, Dalchiaran. It wasn’t until much later that the next generation of the family christened it Grandad’s Cottage.

One morning in 1958, the children (Fiona and her brothers, Callum and Keith) decided to climb what was then a bare hillside opposite the cottage. They set off with a very clear instruction from their mother: stay within sight of the cottage. Presumably, so that she could keep an eye on them as they climbed. 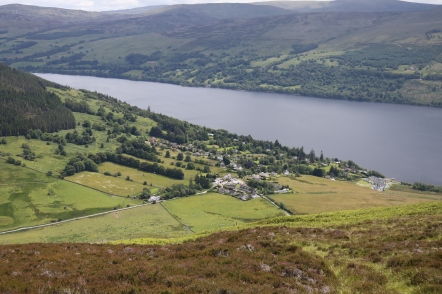 Conveniently, there is a broken down dyke just at that point and the children set about building a cairn – not a very big one, but a cairn nonetheless.

It was later in that same year that Fiona’s father, and a few friends from the newly formed Ferranti Mountaineering Group, took a break from their more serious climbs on Ben Lawers and the Ptarmigan Ridge to climb Creag a’Mhadaidh and reconstruct the children’s heap of stones into a properly built cairn. Messages were written, put into empty beer bottles, and then buried in the middle of the cairn. 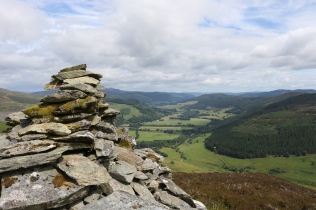 While they were there, no doubt, the mountaineers would have been unable to resist the temptation of going on to reach the summit behind the cairn, which stands at 578 metres. This picture, which is in our Blog’s Gallery, shows the lochan on the summit.

The Cairn has withstood the weather for almost 60 years, and at some point received formal recognition by being marked on the Ordnance Survey map.

The route up is quite challenging and a bit of a scramble at the moment, as the forestry vehicles that have been working up there have destroyed the path. However, it is possible to work your way up to the gate in the deer fence by following the tracks left by their vehicles. The view is terrific ………………..

Last month’s book, ‘Alone in Berlin’ by Hans Fallada, was thought provoking and provided opportunities for an in-depth discussion and reflection on the lives and challenges of ordinary German citizens who were living in Berlin under the Nazi regime. Comparisons were also made between the book and the film.
The book chosen for discussion at the next session is by Anne Cleeves, a popular author with many of the group. It is ‘Dead Water’, the fifth book from her Shetland series, which has been televised.
There was a ripple of excitement about the television serialisation of ‘The Cuckoo’s Calling’ by Robert Galbraith’s (aka JK Rowling). Featuring Cormoran Strike, a private investigator, it will be shown on BBC 1 on Sunday evenings (Sunday and Monday this week and available on BBC iPlayer if you miss it). This is a former book club choice and was considered to be a good read.
The next Book Club meeting will be on 13th September.
Coming Up …..
*The FVA’s Soup and A Roll Lunch in the Hall at 12.00 on Saturday 16th September. Members, friends and visitors welcome.
*The Village Hall has the Thrift Shop from 3rd – 9th September.  Donations of good quality clothes and bric-a-brac can be taken to the Thrift Shop during the week, or contact Karen on 830548 if you require items uplifted.