Well, March certainly came in like a lion, in the form of Storm Gareth – let’s hope it obeys the old adage and leaves like a lamb at the end of the month.

Preparations are continuing for the Ceremony of Commemoration on 6th May, which will start at 2.30pm on the day. Details of the ceremony and the arrangements will appear on the Blog as they become available.

Information linked to the 1943 crash continues to emerge.  Four men died when their plane crashed in the Cow Park and, although we have learned quite a lot about the 3 Russian airmen over the last 3 years, the fourth man – Czechoslovakian Frantisek Drahovzal – remained something of a mystery.  We had no photograph of him and no biographical information.

Only in the last week or so, Frantisek’s family in Czechoslovakia have been traced and we now know that he came from the area around Trutnov where he lived with his German wife and family.  After the German invasion of Czechoslovakia and their disbanding of the country’s army, he crossed the border to join the Czechoslovakian army which had been recreated in exile. As a result, the family at home faced intimidation by the Gestapo and suffered, first hand, the deprivations of a brutal war.

After the war, the family continued to be persecuted because of their German heritage and, in the spring of 1946, all Germans were forcibly banished from the area. Frantisek’s family were taken to an internment camp and subjected to very tough conditions. The Drahovzal family managed to survive thanks to the help of their grandmother, who was not interned, and able to supply them with food.

Although their father had died in 1943, it was not until 1946 that his son, also named Frantisek, learned of his father’s death.  The news was made even more difficult for the family by the mystery surrounding his death and why, having been President Benes’ chef in Czechoslovakia, he came to be working as a cook at RAF Errol and why he was in the plane that crashed outside Fearnan.

Members of the Drahovzal family are planning to attend the Ceremony on the 6th May, and Fearnan looks forward to welcoming them.

A very big thank you to Josef ‘Joe’ Vochyán of Czech RAF Crew*, who managed to trace the family and obtained the photos above .

*Czech RAF Crew is a civic association that was formed to honour the memory of the 2,500 Czechoslovakian airmen who served in the RAF during WW2, and to promote them as role models who fought not just for the freedom of their country but for the future of later generations.

This week, Fearnan’s very own Pop-Up Coffee Shop (a.k.a. the coffee morning) popped up for the first time this year.  Two days earlier, it had been St Patrick’s Day, so this was sufficient excuse for some Irish-themed bakes and, indeed, for one participant to adopt, in full, the colours of the Irish flag! 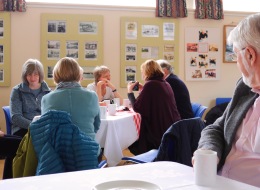 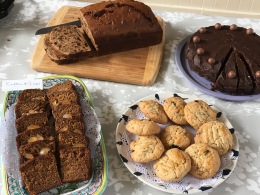 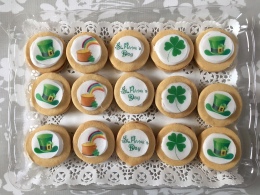 It was an enjoyable and sociable occasion, and the Coffee Shop will pop up again just after Easter, on the 23rd April at 10.30.  (Cue fluffy chicks, hot cross buns and simnel cake.)

The Art Club also met for the first time this year, with a visit to Kenmore.  After a tasty lunch at the newly opened Paper Boat coffee shop, the group found some sheltered spots around the village for sketching.

The next Art Club outing is at 12.30 on Monday 1st April, starting at Kenmore Sports Club.

In February, the Book Club discussed The Wardrobe Mistress by Patrick McGrath, which was shortlisted for the Walter Scott prize for historical fiction. Set in 1947 in post war London, it is a multi-layered book which, although not highly rated by the group, was successful in generating a high level of discussion with extensive and enthusiastic conversation and varied opinions. A few didn’t find it particularly enjoyable due to the number of strands and characters but most persevered and wanted to keep reading to see how it would develop.

Joan, the wardrobe mistress of the title and recently widowed, presented an interesting juxtaposition – she was struggling to make sense of the past and trying to construct a future, and all the while re-evaluating her life with a husband that she thought she knew. The revelation that her husband was a fascist while she was a Jew evoked sympathy, although we found this not quite plausible. She also had to contend with a turbulent, neurotic daughter (albeit a brilliant actress) while cultivating a relationship with her husband’s understudy, who took over his role both on and off the stage!

Detailed descriptions of plays and events painted a rich picture of the seedy glamour of the theatre world and the fascist unrest in London at the time. We found the dramatic ending unexpected.

The Magpie Murders by Anthony Horowitz was the book for March, and the discussion was much shorter than usual, and not as polarised as some have been.

The book was mainly enjoyed for the fact that it was cleverly constructed in an unusual format – a book within a book.  Many of the group enjoy both traditional and modern murder mysteries so this allowed us to buy one, get one free! It was absorbing and character-driven with an unusual style and red herrings aplenty!

Some found it annoying to change stories midway and others preferred the traditional strand to the modern one. There were many links to other well know fictional detectives, and homage paid to the work of Agatha Christie as portrayed in the old-fashioned murder mystery.

As always, all was finally revealed and both motives and solutions pulled together in the end in classic whodunnit style.

The book for April is A Case of Doubtful Death by Linda Stratman.

The Fearnan Village Association’s AGM will be held on Saturday 30th March at 4pm in the Hall. All members are welcome.