One for Sorrow, Two for Joy

There have been some unusual avian visitors to Fearnan during November. Firstly, a single magpie was present in the village for a week in early November – quite a rarity away from urban centres as it is heavily persecuted by game estates in the countryside.

Secondly, on the 26th November, two waxwings were feeding on the ornamental rowan berries on the tree at the Hall entrance. There were eight present the next day along with blackbirds and a mistle thrush gorging on the berries. Waxwings breed in the taiga forests of Scandinavia and Russia and in some winters, when the berry crop fails in Scandinavia, large numbers migrate to the British Isles. During these ‘irruption’ years, flocks of up to a few hundred can be encountered feasting on berries during the winter months. 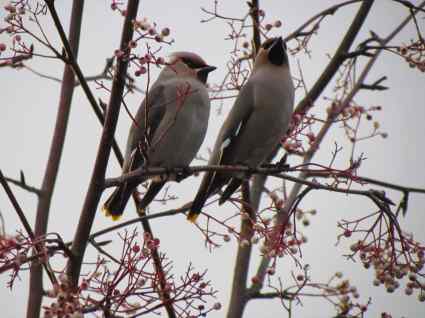 Their name derives from the red waxy tips on the wing feathers shown on this nice adult male in the hand which I caught by the hall on the 22nd November 2010. They have a distinct trilling call, distinct crest and usually allow a close approach. 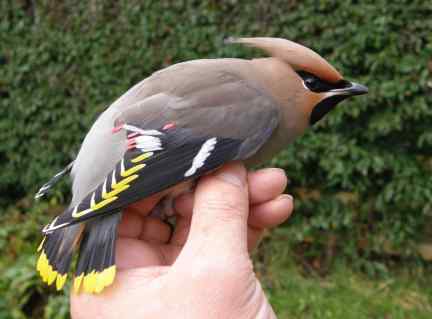 Meanwhile, The Blog has been taking a look at Boreland Forest and its Design Plan.

Boreland Forest (sometimes known locally as Boreland Wood) lies on the northern shore of Loch Tay, just to the west of Fearnan, and covers an area of 343 ha. It was purchased by the Forestry Commission in 1938 as part of a larger estate, but the hill ground and lower agricultural land were disposed of subsequently. Planting began soon after purchase, with Norway spruce being the main crop species for the first rotation, and the early 1940s war effort saw much of the forest planted by Canadian workers.

The forest is not only home to both capercaillies and red squirrels, but is also an important site for projects that are working to conserve and boost the numbers of these endangered species.

The capercaillie is a native species that became extinct in Britain in the mid-18th century, and main cause for the extinction was thought to have been a catastrophic loss of its woodland habitat.  Birds from Sweden were reintroduced into Perthshire in 1837, and by the 1970s numbers of capercaillie had grown to about 20,000. Since then, however, the species has been in long-term decline.

Boreland Forest lies within the local ‘core capercaillie area’ making it an important factor in the efforts to reduce the decline in their numbers and you can read more about this project here. 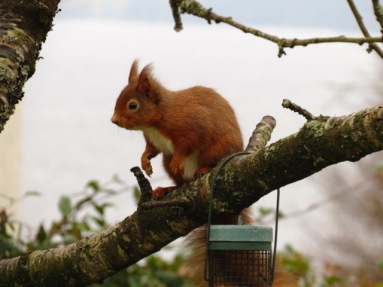 We are fortunate to live in an area where red squirrels are seen regularly, but their future in Scotland remains under threat. There are estimated to be only 160,000 red squirrels remaining in the UK, 75% of which are in Scotland. Without concerted and effective action to protect them, the red squirrels that remain in Scotland could disappear within our lifetime.

Boreland Forest is one of the sites chosen for the ‘Save Scotland’s Red Squirrel’ project which aims to boost numbers and secure their future.

But the forest also holds significance for Fearnan. Early records show that the original Barony of Fearnan was made up of a number of croft units situated along the loch-side – several of them in the area now covered by Boreland Forest.  A copy of an old map showing the location of these crofts is included in the permanent exhibition in the village hall and the ruins of some of these crofts are still visible.

About 5 years ago, Ian McGregor’s grandsons unearthed the remains of a traditional cast iron cooking pot at the site of the Tominlyvoir croft (below) in Boreland Forest. 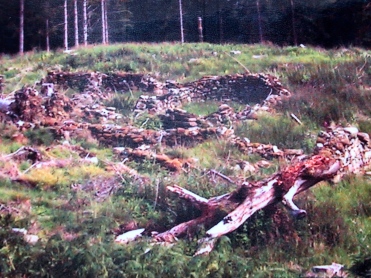 The pot, which was found in the ruins of what would have been the last occupied house in Tominlyvoir, is on display in the Hall.

In 1755, there were 47 people living in seven dwellings in this croft unit, but the population of the whole area was in decline and, by the 1841 census, there were only 3 people left.

The forest is also the location of a number of Unscheduled Ancient Monuments including Fearnan’s Market Cross (or the Fair Stone of Fearnan).

It appears on early maps of Fearnan making it possible to date it as pre-1769.

The stone carries a curse, inscribed on the back, and is a warning to anyone who might think about meddling with the stone:

“Tradition says this stone is at the fair or market cross of Fearnan and cursed be he who remove it. Breadalbane.”

The Forestry Commission has a Design Plan for Boreland Forest for the period 2010 – 2020 and those who walk in the forest, or live close to it, may be interested to click on the link and have a look at the Plan which sets out the Forestry Commission’s aims for the forest not just in terms of the woodland areas but also for its wildlife.

The Forestry Commission have written to our local Community Council proposing some changes to the current Plan – mainly aimed at achieving a more ‘natural’ treeline in some areas and adjusting the species mix for re-stocking. Unfortunately, there is no digital link to the relevant papers, but anyone interested in finding out more about the proposed changes, and possibly commenting on them, should contact Sue Dolan-Betney (click here,) who can email the relevant documents.  Comments need to be with Sue before the 20th December.

In recent postings on this site, we have told the story of 7 of the 8 local men who are commemorated on the Fearnan War Memorial.  One, however, remained a mystery until now. Thanks to research by Mike Haig and Mark Duffy (both members of the Great War Forum), we now know that Duncan McPhail signed up with the Scots Guards early in 1915. He is listed in the Parish of Kenmore Roll of Honour (“A List of men, natives of the Parish and others residing therein, who have gone forth to serve their King and Country in the War”).

Duncan was 32 years of age and is described as a farm servant. The medical inspection that he underwent after signing up shows that he was in poor health and he was subsequently discharged on account of his health. His Death Certificate shows that he died, not long afterwards, of meningitis.

At the November meeting of the Club, the book discussed was Slow Horses by Mick Herron.

There was, as always, a mixed reaction to book. Most felt the pace was too slow and that the book only became interesting towards the end.  The huge cast of characters was confusing, making it more difficult to engage with any of the characters and to sustain interest.

The group were satisfied with the ending, unlike some other books we’ve read this year, but it was obvious the ground was being prepared for follow-up books.  We thought it would make a good TV series featuring Robbie Coltrane as Jackson Lamb! The description of a politician (after Sid got shot) fitted Boris to a T!  We liked the fact that females headed MI5.

We have chosen two books to read over the next couple of months and to be discussed at the first meeting of 2019 on Wed 9th January –  Excellent Woman by Barbara Pym, and The Wardrobe Mistress by Patrick McGrath

The next meeting will be the Book Club Christmas dinner, which has been confirmed for Thursday 13th Dec.

Our annual Mulled Wine and Mince Pies will be held this Saturday, 8th December, in the Hall, from 3 – 5pm. Join us for a pre-Christmas glass or two, some mince pies and good company.

It’s £6 per person and after expenses, a donation will be made from the takings to the McLean Hall fund.

Just think! What a fabulous opportunity to wear that Christmas jumper that is lurking at the back of the cupboard!

Many thanks to everyone who responded so quickly to the email about the Staying Connected project.  We won’t be sending out any reminders on this one, so if you had intended to reply but haven’t got around to it yet, why not do so now?