Now that summer is more or less over, Fearnan’s Poppy Project will be entering the final straight leading up to the 100th anniversary of the end of WW1. We are hoping that our faithful band of knitters will be able to top the current (fantastic) total of over 500 knitted poppies, which will be used to decorate the war memorial on Remembrance Sunday.

Recently, Aberfeldy Museum published a short piece on Private S/15683 Hugh Cowan of the Black Watch, and son of Donald and Ann Cowan of Balnearn, Fearnan. Hugh, of course, is one of the men commemorated on the Fearnan War Memorial and his story serves as an inspiration for all who have contributed so far to the Poppy Project.

Many thanks to Aberfeldy Museum for their permission to reproduce the following article: 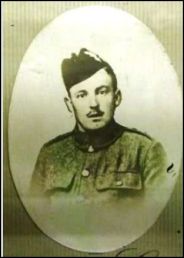 “Hugh Cowan was called up on Wednesday 7th June 1916, at Comrie, where he had been working as a ploughman, and was posted to the 11th Battalion The Black Watch. From this date up to the end of November, he was training at Dunfermline, before embarking at Folkestone, on Friday 1st December 1916 and landing at Boulogne on the same day.

After further training at Étaples, he was soon transferred as Private 33495 to the 1st Battalion of the Royal Scots Fusiliers, joining them in the field on the evening of Wednesday 13th of December 1916, when the Battalion relieved the 7th Battalion of the King’s Shropshire Light Infantry in the trenches at Serre, on the Somme. The relief was completed by 9.00 p.m., with Hugh Cowan being one of 140 men who had joined that day as reinforcements. Luckily, although enemy artillery was heavy, (as was the rain), they had no casualties and they were in turn relieved by a battalion of the East Yorkshire Regiment on the 16th December.

His battalion was part of the 8th Infantry Brigade of the 3rd Division, VI Corps, of the Third Army. The Official History states: The enemy obviously had foreknowledge of the attack; for, prior to its launch he deluged the front with chemical and high-explosive shell. At Zero, in fact, the field batteries were enveloped in thick clouds of gas. The detachments, wearing respirators, stuck manfully to their task. The infantry, however, was much disorganized. Most of the battalions also wore respirators during the assembly, and numbers of men who did not put them on, were overcome by vomiting. The 8th Brigade (Hugh Cowan’s brigade) fell into confusion, largely owing to the fire of parties of the enemy who had been pushed forward into shell-holes and had thus avoided the British barrage. The waves of the 2nd Royal Scots and 1st Royal Scots Fusiliers becoming prematurely merged, the barrage was lost, and the attack broke down.

His body was found at map reference 57b.O.8.b.9.9., about half a mile southeast of Monchy le Preux. He was buried in Vis en Artois British Cemetery, Ref VII.D.2.”

Would you be able to make a contribution to our Poppy Project, to help commemorate men like Hugh Cowan? The pattern for the knitted poppies can be found here and finished poppies can be dropped off at Fearnan Hall. Contact the Blog if you need an address to post them.

The Art Club, putting down their own sketch pads and paints for a change, enjoyed an outing to the Big Shed where photographer Stuart Green and artist Debbie Cassells were resident for the month of August.

Debbie gave the group a demonstration of mixed media – she paints with acrylic and then adds collage to the picture. This produces unusually textured and layered artwork, which often incorporates local materials – such as Harris Tweed, or cuttings from printed media. She aims to draw the viewer into the painting and so encourage further investigation of the piece.

The Accident on the A35 by Graeme Macrae Burnet proved to be a successful Book Club choice in terms of the level of discussion it stimulated at the August meeting.  As is often the case, our reviews were mixed and the level of enjoyment of the book varied within the group.

This novel is purported to be a translation of a decades old manuscript of a novel by Raymond Brunet sent to a publisher. We debated whether this was the case, or was this also fiction?

Set in the small town of St Louis in Alsace, we detected strong hints of “Maigret”. The detective, George’s Groski, who first appeared in an earlier novel, The Disappearance of Adele Bedeau, seemed to fit the stereotypical portrayal of the flawed detective with marital problems and who perhaps drank too much. Comparisons were made with Rebus and other well known fictional detectives.  We acknowledged that this character was very thorough and methodical and, despite his alcohol consumption throughout the working day, he managed to complete the necessary groundwork and follow all leads.

The general feeling was that it was hard to relate to the characters or, indeed, feel sympathy for many of them, including Raymond the bereaved teenage son, who was liberated after his father’s death in the accident referred to in the title. We followed his bold escapades as he perhaps went off the rails, and was stunned by discoveries related to his father’s other life.

However, we did acknowledge the author’s evocation of the real feeling of St Louis and the excellent portrayals of the characters and their interactions with each other. There were detailed descriptions of the atmosphere and interiors of the bars visited and we could clearly picture the clientele who frequented them.

In conclusion, mixed opinions of a book that meandered and then concluded very quickly. As a group we will look out for any future novels by this highly regarded, Booker prize nominated author.

The book for September is The Guernsey Literary and Potato Peel Pie Society, an international bestseller, and also a popular, major film. This historical novel, set in 1946, reveals the suffering experienced by the people of Guernsey in WW2 whilst highlighting their character and resilience. It is based on an exchange of letters and despite the background and context, it has been described as “touching, quirky and funny”.

The September meeting on Wednesday 12th has a different format. Fran and Elaine are kindly hosting a viewing of the film at their house, followed by a discussion and a chance to compare the book and the film. Due to the length of the film, we will start at 7.00 pm to allow time for discussion.

Sharpen your wits, Quizzers! There’s another chance compete for the title of Quiz Night Champion, this time in Fortingall on Friday 14th September at 7.30 pm. Check out the poster for the details here Quiz Night Poster

The next Fearnan Village Association Coffee Morning will be on Tuesday 25th September at 10.30 in the village hall, when we anticipate being able to use the new kitchen for the first time! Come and enjoy some excellent home baking, savouries, freshly made coffee – and the chance to catch up with friends and neighbours after the summer break.