Coffee Morning……and a visitor from Russia!

After a break in August, our regular Coffee Mornings re-started on a sunny September morning last week.  As ever, there was an excellent spread of goodies – freshly baked cakes, warm pancakes and tasty savouries – and we were pleased to welcome regulars, new residents and some passing visitors. 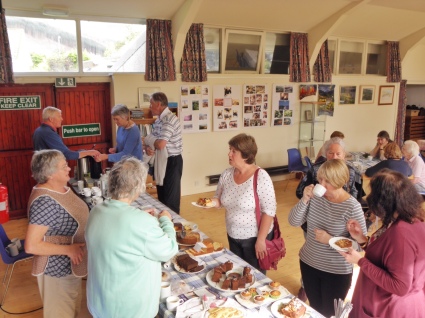 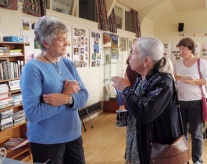 Many thanks to those who baked and those who helped set up and clear up.

Please note a change of dates in October. The event on Sat 15th Oct has been cancelled and there will now be a Coffee Morning on Tuesday 11th October.

In the middle of August, we were delighted to welcome a special visitor to Fearnan.  Anna Belorusova, who provided so much information on the wartime air crash in Fearnan (The Fearnan Air Crash 1943), fulfilled her ambition to come and visit the site of the crash in the Cow Park.

She is writing a book that tells the story of the Russian airmen who came to Scotland during WW2 and, in particular, about the pilot of the ill-fated plane, Alexander Gruzdin, who was a Hero of the Soviet Union. Anna was accompanied by Bradley Borland, the Errol Aerodrome Historian.

Anna was enchanted by Fearnan, describing it as ‘a magic place’ and, as she lives in an area that is largely flat, she found our scenery quite stunning. Having found his gallery on the internet, she was also delighted to have the opportunity to visit Keith Brockie in his studio.

There was an unexpected surprise for Anna as we walked back from the Cow Park – she spotted some mushrooms growing in the middle of a garden lawn.  They were Birch Boletes (or Leccinum Scabrum to give them their Sunday name), something that is considered a great delicacy in Russia, but is somewhat harder to find than in the middle of the garden!

She said later “I will never forget that sight, as usually mushroom-picking is a serious business, especially in Russia. One has to wake up at dawn, drive for a couple of hours to some secret location and then struggle for few hours through woods and swamps!”

There are still plenty of them about in our gardens, and she recommends pouring boiling water on them, letting them drain and after that cutting them up and frying them with lots of onions. Then you could add sour cream and mix with potatoes. “A great delicacy” she said, “I cooked them this way on my return from Fearnan that evening, to everybody’s great delight.”

(Don’t forget the change of date for October – the Coffee Morning is on Tuesday 11th.)

Fearnan Village Association was formed in 2007 to provide a means through which those who live in the village can come together to discuss and respond to issues of importance to the village, particularly those that will have an impact on our quality of life. We also organise social events, such as the very popular Pudding Night in February, Strawberry TeaZ in July, and other events and coffee mornings throughout the year.
View all posts by Fearnan Village Association →
This entry was posted in Uncategorized and tagged Fearnan Air Crash. Bookmark the permalink.

1 Response to Coffee Morning……and a visitor from Russia!